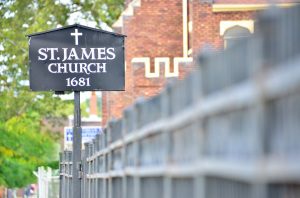 St. James Anglican Catholic Church was founded in Cleveland, Ohio in 1857 as a mission of Trinity Episcopal Church (now Trinity Cathedral). At that time, St. James was the fifth Episcopal Church parish or mission in the then 60 year old city of Cleveland, and was originally situated at the corner of what is now East 26th and Superior Avenue. St. James relocated to its current location at the corner of East 55th and Whittier Avenue in 1890. According to available records, Mr. H.B. Smith was the architect for the new building, and the estimated cost of construction was $5,000. St. James’ new building was dedicated by the Rt. Rev. William A. Leonard in October of 1890.

From its inception, St. James has been led by a succession of priests who were all heavily influenced by the Tractarian Movement in England. As a result, the parish has long been known for its dedication to “High Church” Anglo-Catholicism in the Cleveland area. St. James first Rector as a parish church, the Rev. Theodore Clinton Foote, was responsible for instituting such traditional Catholic practices as daily Mass, Confession, and perpetual reservation of the Blessed Sacrament, along with the regular use of incense at the Mass and Evensong. Fr. Foote served St. James from 1890 until 1898 when he left to accept a professorship at Johns Hopkins University in Baltimore.

Fr. Foote was succeeded by the Rev. John A. Staunton Jr., whose tenure was notable for his establishment of a ward of the Guild of All Souls at St. James. It is worth noting that during this period in time, there was a movement in the Episcopal Diocese of Ohio to quash Anglo-Catholic practices in various parishes; yet somehow, St. James remained unaffected by these efforts. St. James subsequent Rectors and parishioners continue to realize the benefits of this “oversight”.

Most notable among these Rectors is the Rev. Canon Vivian A. Peterson. Canon Peterson was called by St. James in June, 1939, and he served the parish in that capacity for forty-five years. In addition to his many appointments and responsibilities within the Diocese of Ohio, Canon Peterson also served on the editorial committee which produced the first edition of the American Missal in 1931. He also served as commissary for the American foundation of the Order of St. Benedict, continuing in that capacity until the establishment of St. Gregory’s Priory in Three Rivers, Michigan. Among Benedictines, Canon Peterson still holds the title of “Godfather”.

In 1923, Canon Peterson made his first pilgrimage to the shrine of Our Lady of Walsingham, in Norfolk England, where he became a friend of Fr. Alfred H. Patten who led the restoration of that shrine. This friendship developed to the point that during World War II, Fr. Patten charged Canon Peterson with the restoration of the Shrine, in the event that it was destroyed by German bombs. While this proved not to be necessary, Canon Peterson was the first American to be elected as an honorary Guardian of the Shrine in 1946. Prior to his retirement in 1964, Canon Peterson oversaw the erection of an image of Our Lady of Walsingham in St. James Church. Since that time St. James has hosted an Annual Pilgrimage to the Shrine, and the parish celebrated the 50th Anniversary of this Pilgrimage in 2014. As the national Shrine of Our Lady of Walsingham for the Anglican Catholic Church, it has become a focal point for Marian devotion for the Church.

In 1970 St. James called the Rev. Frank C. Irvin as Rector. It was during Fr. Irvin’s tenure that the parish determined that the Episcopal Church had deviated from the Catholic Faith through changes in its doctrine and discipline and through the presumed “ordination” of women. In May of 1978, the parish voted to withdraw from the Episcopal Church and align with the newly constituted Anglican Catholic Church. In a subsequent agreement, the Episcopal Diocese of Ohio ceded the title of all parochial property to the Rector and people of St. James.

Fr. Irvin continued as Rector of St. James until his passing in 2001, additionally serving as Archdeacon of the Anglican Diocese of the Midwest during this time. He was succeeded that year by the Rev. Cyril K. Crume. Under the leadership of Fr. Crume, St. James continued its Anglo-Catholic tradition in Cleveland, and in 2007 the parish hosted the 17th Synod of the Original Province of the Anglican Catholic Church. Fr. Crume departed this life unexpectedly in September 2013. In November of that same year, St. James called the Rev. Daniel J. Jennings to be its next Rector, and he was instituted by the Rt. Rev. Rommie M. Starks in March of 2014.