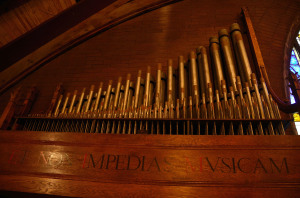 St. James’ recognized the importance of music befitting of the Anglican Liturgy very early on. Although little can be found about the music in the church from before the 1930’s, church budgets show that music was always a priority and that the choir had three paid singers as early as 1900.

The music at St. James’ gained local prominence during Mr. Walter Blodgett’s tenure as Organist and Choirmaster from 1936 until 1950. At that time, the choir numbered around 20 voices, some volunteer and some paid, and Blodgett formed the larger St. James’ Festival Choir in 1937, which gave annual concerts of major choral works, including some that had not previously been heard in Cleveland. As the reputation of the music program grew, St. James’ became something of a musical center in Cleveland, and some masses were broadcast on WTAM, Cleveland. Walter Blodgett left St. James’ to take up a new position at Saint Paul’s, Cleveland Heights in 1950 and took most of the choir with him.

The musical tradition of St. James’ remains steeped in the great musical traditions of both the Roman Catholic and the Anglican Church. The choir, a mix of volunteer and professional singers numbering around 10 voices, offers a full setting of the Ordinary of the Mass and chanted Minor Propers for every Sung Mass, along with occasional motets. Its repertoire ranges from Gregorian Chant to Renaissance Polyphony by the likes of Byrd, Tallis, and Palestrina, to settings by Mozart and Haydn, and beyond. In addition, several local composers have written new works for the choir.