The Anglican Catholic Church of St. James > The Holtkamp Organ 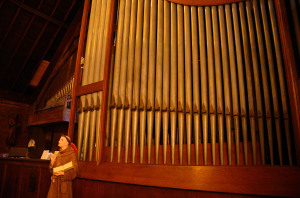 In the middle 1930’s Walter Blodgett, Organist and Choirmaster at St. James, Cleveland, Ohio, engaged Walter Holtkamp, Sr. to provide a Positiv division to add to the then existing organ in the church. It is considered by some to be the first exposed Positiv installed in any church in the United States. Considered to be a pioneer in American organ building, Mr. Holtkamp was also contracted to provide a completely new organ for St. James, which incorporated the Positiv already installed, in 1937. At a time when most new organs were lush, romantic instruments with thick, but muddled, sound, The Holtkamp Organ was built with clarity of speech in mind, to best serve its role in worship and to best interpret the works of Bach and his contemporaries.

Since its installation, the Holtkamp Organ has undergone a number of minor changes, but by the time of the beginning of the tenure of the Venerable Frank C. Irvin in 1970, the instrument had fallen into disrepair. Rather than scrapping this historic organ in favor of a newer electronic version, Fr. Irvin lead an effort to save this piece of Holtkamp’s legacy. Over the course of the next decade, the necessary funds were raised to complete the restoration, and the Holtkamp Organ was rededicated on Sunday, October 26, 1980 with a recital prepared for the occasion by Mr. Louis Hill.

In the late 2000’s, another restoration began under The Reverend Cyril K. Crume, the first stage of which was completed in 2011. Work is ongoing, with another project completed in 2014 and more to be completed in the coming years.

In 2009, the Holtkamp Organ was featured in a recital by John Ferguson, Professor of Organ at St. Olaf College of Northfield, Minnesota, as part of the national convention of the Organ Historical Society in Cleveland.

The Holtkamp Organ continues to serve St. James Anglican Catholic Church to this day and the enduring quality of the instrument adds to the excellence and majesty of the worship here.

The Holtkamp Organ contains 26 ranks of pipes spread across three manuals and pedal. The Positiv chest is a slider chest, which was highly unusual at the time of its installation, and the rest of the organ contains Pitman chests. The exposed pipes in the Positiv were extremely radical for the time, and were left exposed so that they may speak clearly into the room, an intention made clear by the inscription on the chest, “Et Non Impedias Musicam,” which translates to “And Let Nothing Impede the Music.” The remainder of the organ is behind a speaking facade. Both the stop action and key action are electro-pneumatic.