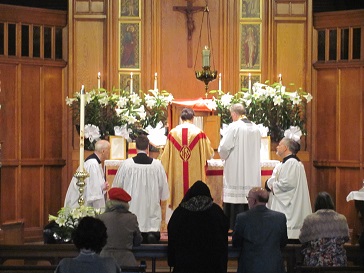 At St. James Anglican Catholic Church, the central act of worship is the Mass. Also known as Holy Communion, the Eucharist, and the Lord’s Supper, the Mass is celebrated in obedience to Our Lord’s commandment to “Do This”. The liturgy of the Mass expresses the Church’s belief in the Mystical Presence of Christ, in the bread and wine. Or as Our Lord himself told us; “THIS IS MY BODY: THIS IS THE CUP OF MY BLOOD”.

According to the Anglican Missal, the word “liturgy” in the original Greek connotes a “public service” to be performed. In Christian terms, Liturgy implies a moral obligation as the basis of public worship. From the beginning, the Church worshiped liturgically, using forms derived from those used in the synagogue and temple. Over time, the liturgy of the Church was established by canonical authority and ordered by the customs and ceremonials of Catholic tradition. Again, according to the Missal, liturgy is imposed upon us by the Church as a duty, and is maintained and protected through obedience to her traditions. It is through its liturgy that the Church expresses its Faith.

Every liturgy is comprised of rites and ceremonies. A rite stipulates what is said during the liturgy and the order in which it is said. Ceremony describes the physical acts that are performed during the liturgy. Examples of various liturgies include Morning and Evening Prayer, Benediction of the Blessed Sacrament, and the Holy Mass.

The standard for liturgical worship at St. James, and in the ACC, is the traditional Book of Common Prayer (1928 in the US) and the Anglican Missal. Additional devotional supplements may be used at the discretion of the Bishop and in accordance with the Constitution and Canons of the ACC.

In the middle 1930’s, St. James Organist and Choirmaster Walter Blodgett engaged Walter Holtkamp, Sr. to provide a Positiv division to add to the then existing organ in the church. It is considered by some to be the first exposed Positiv installed in any church in the United States. Considered to be a pioneer in American organ building, Mr. Holtkamp was also contracted to provide a completely new organ for St. James [read more]

St. James’ recognized the importance of music befitting of the Anglican Liturgy very early on. Although little can be found about the music in the church from before the 1930’s, church budgets show that music was always a priority and that the choir had three paid singers as early as 1900. [read more]