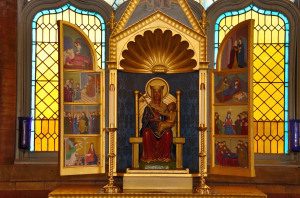 The word “rosary” is derived from the Latin “rosarium”, which means “Crown of Roses”. During the Rosary we reflect on the various Mysteries of the life of Christ, and ask for the intercessory prayers of his mother, the Blessed Virgin Mary. It is also a special devotional to Mary herself and her singular place in the life of Our Lord is acknowledged and praised by all who participate. The Rosary has long been a devotional practice among Anglo-Catholics, especially those who feel a special connection to the Blessed Mother. 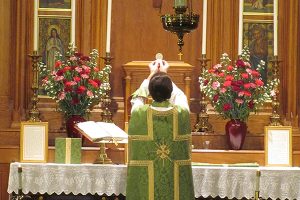 Benediction of the Blessed Sacrament Benediction of the Blessed Sacrament involves the exposition of the consecrated Host in a vessel known as a Monstrance. During the Benediction rite the congregation sings the hymns, “O Salutaris”, and “Tantum Ergo” while adoring the Body of Christ Mystically Present in the Host. The priest or bishop officiating at the service then blesses the congregation with the Host, after which the Devine Praises are proclaimed. The service concludes with the singing of the “Te Deum”. To view an example for the order of this service see Evensong Bulletin Advent 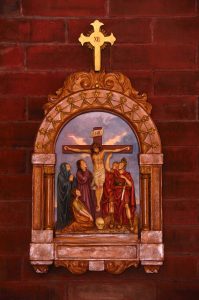 Stations of the Cross Also known as “the Way of the Cross”, this purpose of the Stations is to provide the faithful with the opportunity to make a spiritual pilgrimage to the fourteen primary scenes of Christ’s Passion and Death. The practice of such a pilgrimage, in various forms, has been known since the earliest days of the Church, and its origins can be traced to the Holy Land in the first century. Though the elements of the current custom were not established until the fifteenth century, the Stations of the Cross have long been a popular form of Catholic devotion during the Lenten Season. During this devotion, the faithful pass from Station to Station, pausing at each one to meditate on the mystical significance of the scene depicted in a carved or painted picture. Each meditation is usually accompanied by prayers of devotion and contrition, and a companion hymn (known as the “Stabat Mater”) is sung or recited as the pilgrimage passes from one Station to the next. The service concludes with a reflection on Christ’s imminent victory over death and a prayer imploring God’s Mercy. At St. James, the Stations of the Cross are held on Fridays during Lent, and at other designated times during the Lenten Season. Please see our calendar for details.